The second season of In die Sop: Restaurant Evolusie starts 27 April 2022 on kykNet

In die Sop: Restaurant Evolusie is back

Sit down with celebrity chef Bertus Basson for the second season of the restaurant makeover show, starting 27 April 2022 on kykNet. 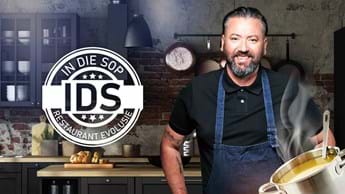 In the first episode, Bertus and his team tackle an unusual challenge, when they visit a farm stall in the Overberg town of Napier. And, after this episode Moerse Padstal will definitely not be the same place as before.

For the second season, 11 other restaurants also open their doors to the In die Sop gurus, in places such as Brackenfell, Doringbaai, Stellenbosch, Montagu, Gordon's Bay, Lamberts Bay and Swellendam.

As before, each episode will showcase how a restaurant undergoes a transformation in just three days. Viewers will see new life being breathed into restaurants within 72 hours, ranging from everyday eateries to gourmet restaurants.

Bertus is again assisted by the decor expert, Misi Overturf.

“With In die Sop, it's not just about the end results, but especially about the difference it makes in the lives of all the parties involved,” says Bertus.

Bertus and his team of experts can change anything.

“As always, there are no sacred cows and we can tweak the restaurants' kitchen, layout, furniture and dishes. But thanks to the first season, the new participating restaurants have a better idea of what our recipe entails.”

According to Bertus, he and his team seek to empower and inspire restaurant owners with their knowledge and experience.

The first series of In die Sop made the chosen establishments, which suffered under the strict measures of the Covid-19 pandemic, household names. In addition, the show not only attracted new customers for them but also boosted local tourism.

“It definitely made us famous all over the country, as our guests come from everywhere,” says Gielie de Kock of Marsanne's Restaurant & River Breeze Venue in Witsand.

“People really enjoyed the program and I reckon half of our customers are due to our participation of In die Sop.”

According to Hentie van der Merwe of Kossie Sikilela in Darling, In die Sop was the answer to their prayers.

“The whole experience is something we will not trade for anything in the world as it has greatly improved our restaurant and put it on the map!”

“We received so many new guests thanks to In die Sop,” says Hentie.

This is also confirmed by Anton Hougaard of Jaart Restaurant in Wellington.

“The show opened many doors for us and since then we had visitors from Durban, Pretoria and Johannesburg who watched it. We would never have been able to achieve such exposure on our own.”

kykNET (DStv Channel 144) is available to all DStv Premium and Compact Plus customers. To upgrade your existing package, click here. Or if you'd like to Get DStv, find a service that suits your needs here.