Find new local shows to watch with For the Culture 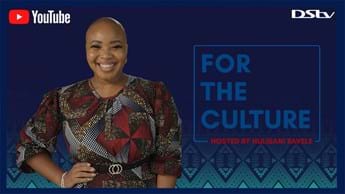 we can navigate them - in the new lifestyle show For The Culture, coming soon to the DStv YouTube channel.

During each segment hot topics such as Identity, Modern Family, Love & Relationships (Polygamy & Polyandry) will be unpacked and discussed, and giving each guest a chance to give their perspective and some their experiences in relation to the topic.

Watch For The Culture now

Here is the episodic breakdown for each week:

Show Title: Identity - Tuesday 10 May
Guest: Six Nyamane
Show Feature: Unmarried on 1Magic
Synopsis: Hulisani Ravele is joined by Six to discuss all things Identity, finding one’s self and the power to owning and leaving your own truth. We get to hear about the character played by Six and how she navigates the challenges life throws her way.

Show Title: Modern Family - Tuesday 10 May
Guests: Sandile Mahlangu & Caddy Tsotetsi
Show: Umbuso on Mzansi Magic
Synopsis: Family Secrets and lies in the name of protecting the family can be detrimental. Hulisani is joined by Caddy & Sandile as they unpack their views on what it means to be a Modern family. They share a bit of their personal journeys in how they grew up & we get to hear about what to expect on Umbuso in detail.

Love & Relationships - Tuesday 17 May
Guest: Gabisile Tshabalala & Nonqaba Rwaxa
Show: Lovey Dovey on Moja Love
Synopsis: The Roles in relationships have evolved over the years and there are new ways of finding love that are outside the norm. In this episode, Ms Cosmo & the presenter of Lovey Dovey- Gabisile give us their insights into all things love & relationship.

Show Title: Language Preservation - Tuesday 17 May
Guests: Leera Mthethwa - Actress and Actor & Author Dr David wa Maahlamela
Show Feature: Gomora on Mzansi Magic
Synopsis: Language preservation is an important discussion in South Africa, For The Culture delves into what we can do to preserve our languages. Our guests unpack what role broadcasters and media platforms have in preservation of our languages.

Show Title: Upbringing - 24 May
Guest: Bahumi Mhlongo – Actress & TV Personality
Show: Umbuso on Mzansi Magic
How we are raised sets a tone or rather influences the type of adult we become. In this episode we unpack key discussion points around upbringing. Bahumi Mhlongo shares a bit of her life journey, where she is at and where she is headed.

Show Title: Mental Health - 24 May
Guest: Siyabonga Vithi – Broadcaster & Host of Siza Mina Mona Monyane - Actress, Founder of Power of Wellness
Show: Siza Mina on Mzansi Wethu
Synopsis: Mental Health has been in the spotlight, exacerbated by the impact on the pandemic. We zone in on how to destigmatize Mental Health . The role that society, social media and other media platforms play when it comes to issues of Mental Health.

Bonus Episode 24 May
Guest: Luthando Shosha (Lootlove) - Television presenter & Radio personality
Synopsis: In this episode of For The Culture, Hulisani Ravele is joined by Television & Radio Presenter Luthando Shosha popularly known as LootLove to touch on some of the issues that have affected her in the industry. She gives us a view on how she is raising her daughters and the type of world she would like them to grow up in.

Watch For The Culture Watch Battle of Ankara now

Tune into For The Culture every Tuesday at 18:00 on the DStv YouTube channel and be a part of the conversation.