DStv has the ultimate April holiday destinations for you to enjoy. Make anywhere you go your Happy Place! 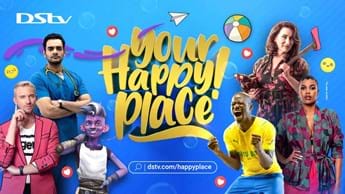 It’s South Africa’s holiday season this April. And whether you’re staying home or out and about, seeing family or flying solo, we’re taking you to a Happy Place.

It’s all about the emotional journeys we take to get there.

Bear Grylls is here to take you on a Wild Adventure as he pushes his celebrity guests to the edge of what they can accomplish. It’s filled with energy, inspiration and some cool scenery. Transplant Season 2 takes us back into the all the highs and lows of the emergency room of a Canadian hospital, where Dr Bash is facing major romantic and professional hurdles. It’s a full body workout filled with nail biting tension and epic emotional journeys. And 1000LB Best Friends Season 1 brings us real-life patients who’re supporting one another along one of the toughest roads they’ll ever walk, as they set about changing everything in their lives, so that they can have lifesaving surgery.

South Africa steps up with 3 thrilling new series, too. Honey (DStv Channel 173) brings us Africa’s most beautiful reality talent show when Battle of The Ankara Season 1 starts on Monday, 11 April. Palesa Mokubung and Gert-Johan Coetzee judge as 10 designers from across Africa dazzle us with their design using their countries’ signature Ankara fabrics and patterns. Talent also steps up to entertain in the delightful outdoor cooking competition series Laat Die Potte Prut: Kampioene Season 1, which sets out to ask who really is the best of the best among SA’s potjiekos chefs. And Moja Love’s (DStv Channel 157) new reality series Ukugenwa Season 1 gives a true perspective on a cultural practice in which a man cares for brother’s widow and children by taking her as his wife.

April’s holidays are also family together-time. And DStv is delighted to offer up all sorts of shows that you can watch with your kids. The brand-new DreamWorks channel (DStv Channel 304), which is normally on the Premium, Compact Plus and Compact packages, is available in South Africa to all Access and Family customers via the open window throughout the month until Tuesday, 19 April. So you can laugh yourself silly watching the Madagascar movies spinoff All Hail King Julien Season 1, with our favourite lemur. And you can read all about the DreamWorks shows and highlights here.

Nickelodeon (DStv Channel 305) brings us the first-ever Star Trek series aimed at kids, Star Trek Prodigy Season 1. Star Trek Voyager fans will recognise the U.S.S. Protostar training’s hologram as USS Voyager Captain, Kathryn Janeway. The series will embrace the Star Trek values of tolerance, equality and scientific curiosity as well as showing what we can do when we work together. And then if you’re looking for something awwwwsome to enjoy with the kids, We Baby Bears Season 1 on Cartoon Network (DStv channel 301) is here! Get ready to offer your kids a big cardboard box of their own to take imaginative journeys in.

Find your own Happy Place with DStv this April, with brilliant holiday viewing.

You can see more highlights for April from DStv Premium, Compact Plus, Compact, Family and Access here. And remember, if you’d love to see more sensational local series, you can enjoy the Mzansi Magic Open Window from 3-18 April.

Adventurer Bear Grylls takes 2 celebrity guests on a journey to explore the terrain of Dartmoor. He’ll push them to their mental and physical limits and teach them a range of survival skills including how to rock climb and abseil. Episode 1 features rugby player Jonny Wilkinson and Olympic boxing gold medallist Nicola Adams.

We see whether Dr Bishop (John Hannah) recovers from his stroke in the Season 1 finale. Syrian refugee Dr Bashir “Bash” Hamed (Hamza Haq) is reunited with Rania (Nora Guerch), a woman from his past, and Mags (Laurence Leboeuf) battles to win over her new boss, Dr Novak (Gord Rand).

Meghan, Vanessa, Tina and Ashley are larger-than-life best friends who’re battling morbid obesity together under treatment from Dr Procter. They’re tackling the hard work with heart and a wicked sense of humour and have been friends since high school. They’ll reveal what it's been like being weight loss losers for so many years.

Heart of our home

Battle of The Ankara Season 1

Design competition series hosted by Luthando "Loot Love” Shosha, with Palesa Mokubung and Gert-Johan Coetzee as judges. 10 up-and-coming fashion designers from different African regions compete for the Ankara fashion crown, with dazzling designs inspired by, rooted in and based on the Ankara fabric.

In this spin-off of VIA’s cooking competition series Laat Die Potte Prut, judges Marinda Engelbrecht and Alvin Bruinders return with tricky tests and challenges as the past seasons’ winning teams go up against each other to win the crown as South Africa’s true potjiekos champions.

Reality series. In the traditional practice of Ukugenwa, a young man can inherit his late brother’s wife and children – whether or not he already has a wife and children of his own. Watch as Siyabonga Mhlongo and his wives MamMkhize (his original wife) and MamChunu (his brother’s widow) find a way of co-existing through jealousy and practical issues as secrets are revealed.

Watch with the children

3-D animation. A group of young aliens on a prison colony in the Delta Quadrant find an abandoned Starfleet ship, the U.S.S. Protostar, escape and make their way to the Alpha Quadrant with the help of the ship’s training hologram in the likeness of former USS Voyager Captain, Kathryn Janeway (voiced by Kate Mulgew).

King Julien, the party loving lemur from the Madagascar films, is here to spread “wisdom”, confusion and a good time as he takes on the wildest adventures that the jungle has to offer, along with his second‐in‐command Maurice, and the eternally devoted Mort. All hail King Julien, bow to the righteousness of his proclamations, and tickle his feet.

Spinoff series from We Bare Bears. After they’re kicked out of their apartment, the 3 brother bears make a wish on a shooting star, and their moving box gets the power to transport them to different worlds as they search for a new home. Expect anything from spins on classic fairy tales to fun genre parodies.

Also watch out for

What can you watch?

NB! DreamWorks (DStv Channel 304) will be available in South Africa to all Access and Family customers via the open window from Friday, 18 March-Tuesday, 19 April on DStv.

To upgrade your existing package, click here. Or if you'd like to Get DStv and find a service that suits your needs here.