From the drama club to the clubhouse to the forest, go inside kid kingdoms this week with DStv’s School Of Laughter 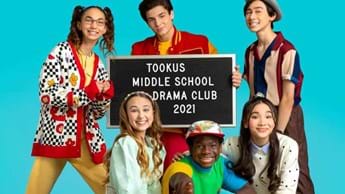 Make it a kid-tastic week with DStv’s School Of Laughter, with three series that take you inside special worlds where children can be themselves.

Drama Club is a brand-new live action mockumentary series about a tween school drama club that goes all out to keep things musical and fun.

And you won’t be able to resist the epic, wildly imaginative outdoor adventures in a kid-utopia in new episodes of S3 of Craig Of The Creek on Cartoon Network (DStv channel 301).

For the little kids, Mush-Mush, the cutest animated mushroom, is back with new adventures with his friends in Mush-Mush And The Mushables, and even mom and dad will want to tune in and learn some more about this mushroom and his group of friends as they play in the forest and learn about nature.

Live action tween mockumentary. A group of friends from the Tookus Middle School Drama Club get a new student director called Mack (Telci Huynh). Mack is excited to take on the school’s new musical named Minnesota, but as soon as they start rehearsals, their choreographer suffers a painful injury and they realise they will need some help.

Craig Of The Creek S3

Check out new episodes of this animated series as Craig and his friends, Kelsey and John, go on adventures in the creek – a kid-utopia of untamed wilderness where tribes of children reign over tree forts and dirt bike ramps! This time Craig discovers an abandoned playhouse on a frozen lake and has loads of fun.

All-new episodes of the loveable animated mushroom Mush-Mush and his best buddies Chep and Lilit bring us exciting adventures. This time Mush-Mush discovers that Morel, one of his friends, is afraid of the dark and tries to help him by going on their first overnight forest camp.