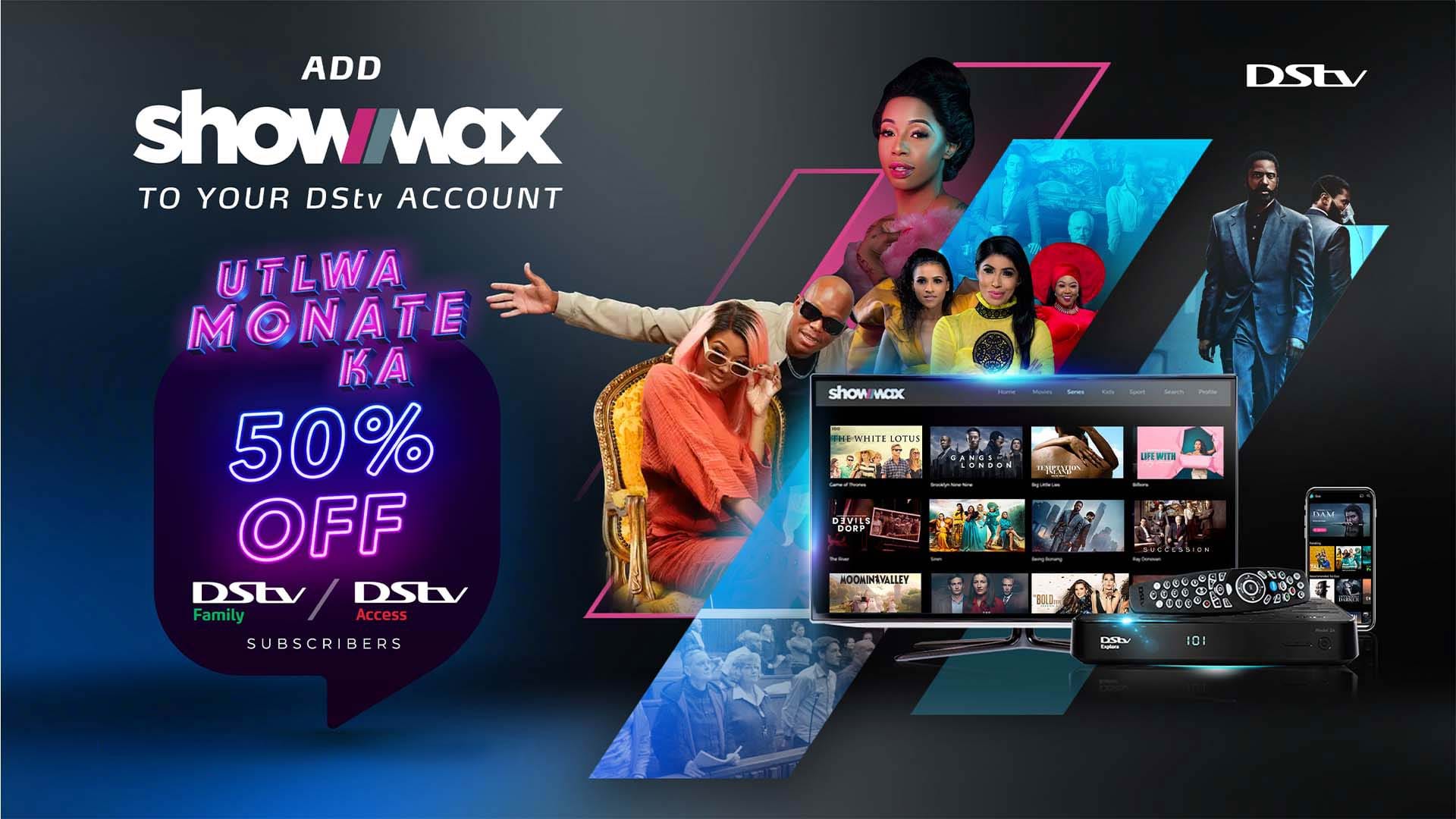 Get 50% off your Showmax subscription when you add Showmax to your DStv account. Now available to DStv Family and Access.

Streaming service Showmax has been available at a discount with DStv Premium, Compact Plus and Compact packages as an account add-on for some time. And now, it’s available at a reduced rate when you link it to your DStv Family or Access package, too!

Just a couple of clicks is all it’ll take to add Showmax to your DStv account and open your viewing world to a whole lot more content – and you can watch in your own time! From movies and international series, to local telenovelas, dramas and reality shows – it’s all available at the touch of a button with DStv and Showmax.

So much more to stream with Showmax

As a DStv customer, you pay even less (or nothing at all!) for Showmax when you add the streaming service to your DStv account. DStv Premium subscribers get Showmax for free while DStv Compact and Compact Plus subscribers only pay half price (R49pm) for Showmax.

From 19 October 2021, DStv Family and DStv Access can get Showmax for R49pm, too! All you have to do is add Showmax to your DStv account and start streaming today! It’s just another way we’re helping our customers feel every moment, for less.

With Showmax, you can stream or download TV shows and movies on a smartphone, tablet, smart TV or media player. You'll love the huge catalogue of local and international shows available on Showmax, including new local soaps like Gomora, Legacy and Isono, as well as the classics like Binnelanders - which are all available to binge on Showmax from episode 1, season 1, all the way up to the current season’s most recent episode.

When you add Showmax to your DStv bill, you also get to enjoy shows that are available exclusively on Showmax like award-winning dark satire drama series Succession and exclusive collections of programming from studios like HBO and Adult Swim.

And if you’re a reality fan, you can also catch dating show Temptation Island South Africa exclusively on Showmax.

Here’s how to boost your TV viewing by adding Showmax to your DStv account:

Showmax allows you to set up five individual family member profiles. The App remembers where each person is in their viewing (even if you’re watching the same show) and recommends new shows according to your viewing patterns. And with the Showmax App, you can make personalised Watch Lists of the shows you’ve spotted that you want to watch after you’ve finished the latest series you’re busy with.

A single Showmax subscription allows you to stream two different shows on two different devices simultaneously, in different rooms, or in totally different locations. You can also access Showmax from the web browser on your laptop or PC. And if you want to see if on the big screen, with a Google Cast/Chromecast receiver, you can stream shows from your phone or tablet to your big screen TV.

With the cap bandwidth function on Showmax, you can limit the amount of data used per hour. The minimum you’ll use is 100MB per hour, if you watch at the lowest quality setting (this is fine if you’ll be using a small screen, such as your smartphone), and the maximum is around 1.5GB per hour.

While Showmax is a streaming service, it also allows you to download up to 25 movies or episodes of series and store them for a limited time to watch while you’re away from an internet connection. Long road trips, rainy days while camping, and long boring grownup events can be a lot easier for kids (and kidults) with a little Showmax stashed away.

The streaming service has announced a diverse slate of exciting new content including eight new series and three new movies. There’s never been a better time to add Showmax to your DStv bill.

Add Showmax to your DStv bill to stream thousands of local and international movies, series, Showmax Originals and more for only R99pm or at a discounted rate with select DStv packages. Available on web, smartphones, tablets and smart TV's.