The radio and television personality has been announced as the host of the Afrikaans version of popular game show, Who Wants to be a Millionaire, coming soon to kykNET (DStv channel 144). 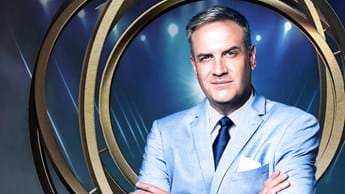 There is no need to use one of your lifelines to find out the answer to the million rand question about who is to be present the Afrikaans version of Who Wants to be a Millionaire.

For kykNET’s Wie Word ’n Miljoenêr, Rian van Heerden will join the likes of Chris Tarrant and Jeremy Clarkson (hosts of the British version), as well as Jeremy Maggs, who was in the quizmaster chair of the original South African Who Wants to be a Millionaire.

Rian, who is a well-known radio (Jacaranda FM) and television personality, is excited about being the face of this popular quiz show. And according to Rian the tension created in each episode is key to the show’s success.

“Viewers insert themselves into the episode as they want to prove that they have what it takes to win the million rand.”

He explains that Wie word ’n millionaire presents unique challenges for him as a presenter.

“With Wie Word ’n Miljoenêr, it is only myself and a single contestant for a big part of an episode, while simultaneously you need to be the person’s friend and quizmaster.”

Wie Word ’n Miljoenêr’s first 13 episode season starts airing on Wednesday 27 October. The show will immediately have a follow-up season, which means it will be on air for six months.

According to executive producer Cecil Barry (Red Pepper Pictures) the Afrikaans show will mimic the rules and structure of the international format but some of the questions will have a South African flair.

156 candidates have been selected for the 26 weeks, with a group of six contestants for each episode.

“We received thousands of entries within two weeks, which we filtered out to a next round where the entrants had to take part in a general knowledge quiz before we selected the final contestants.”

Cecil says that strict security measures are in place to protect the integrity of the show.

“No one is allowed to know who formulates the questions, while the ‘game and quiz’ computer is locked in a high security room to which only the operator, auditor and producer have access.”

Wie Word ’n Miljoenêr is recorded in front of a smaller audience of only 40 people, who are subjected to rigorous Covid-19 protocols and regulations. Production is taking place at Atlantic Studios in Cape Town, which is also home to other kykNET productions such as Suidooster, Arendsvlei en Tussen Ons.

kykNET is available on DStv’s Premium and Compact Plus packages. To upgrade your package or to get DStv, click here.

How to watch kykNET online

Get the DStv app.  It’s no extra cost for DStv subscribers. With the DStv app, the same channels you watch on your decoder at home are available for you to stream online at https://now.dstv.com/, or using the DStv app on your smartphone, tablet, Android or Apple TV, selected Smart TVs or selected gaming consoles.